Pickled foods or tsukemono are an integral part of the Japanese diet. Originally developed out of necessity as way to preserve food before the advent of refrigeration, Japanese pickles now exist in wide variety of forms, with regional specialties boasting their own unique and subtle variations in flavor.

Mitoku’s suppliers make naturally delicious pickles using time-honored methods of one-form pickling developed over centuries. Our pickles are made using a wide variety of techniques and media, but common to all is the absence of refined sugar, synthetic ingredients, and artificial preservatives.

Creating the right environment for fermentation 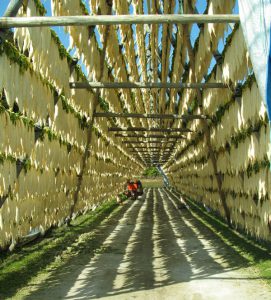 The traditional pickling process used in Japan is technically known as “lactic acid fermentation”, one of nature’s oldest and safest ways of preserving food. The key to good pickling is the early establishment of lactic acid-forming bacteria before other bacteria have a chance to multiply. The latter, which can spoil pickling vegetables, cannot tolerate the high acidity produced by lactic acid bacteria or the high salt concentration used in most pickling methods. To help establish beneficial bacteria, traditional makers must use plenty of well-mixed salt and store developing pickles in a cool place (4-18 °C is ideal).

Although roots such as ginger, carrots, and Japanese radish (daikon) are the most common vegetables in Japanese pickling, other vegetables such as cucumber, burdock, eggplant, and even flowers are sometimes used. The key to making crisp, flavorful pickles, such as Mitoku’s Takuan and Sushi Ginger, is to use fresh, clean vegetables, add just enough high-quality salt, and create a highly acidic pickling medium before the vegetables start to spoil.

How to grow delicious daikon

The daikon in Mitoku’s takuan are grown in Miyazaki Prefecture, on the southern island of Kyushu, in a little village that just happens to be Japan’s no.1 producer of dried daikon. Various factors combine to make this area well suited to daikon cultivation. Firstly, the surrounding area is about 70% woodland. Secondly, in winter the temperature drops dramatically and the area is hit by dry winds. Both of these factors are said to be good for the crop. In addition, low rainfall means that the temperature rarely reaches freezing point, sparing the daikon from frost damage. Furthermore, the soil in this area is high in volcanic ash with good water retention, which helps the daikon grow and gives them good elasticity and thin skins.

In the cold winter months following the harvest, The daikon are suspended in rows on large triangular wooden frames called yagura and left to dry outdoors in the sun. These large frames – 5m high, 80m long, and wide enough to drive a car through – are erected without nails using just rope and bamboo. The great rows of daikon hanging suspended in the winter sun are quite a sight to behold! In the event of rainfall, the local farmers will rush outside to cover the yagura with tarpaulin and protect the precious crops. This drying method is labor intensive and requires constant vigilance, but also gives the daikon their superior flavor.

Sushi ginger is so named because it is almost always served with sushi or sashimi (slices of raw fish served without rice) as a palette cleanser. If you have ever been to a sushi bar, you have no doubt seen mounds of these paper-thin pink or beige pickles.

Pickled ginger is not limited to sushi however. It also makes for an excellent digestive aid, a condiment to use with whole meals, or a snack that can be served all-year-round. Cut into slivers, it is a great addition to tossed or pasta salads (see Pasta and Bean Salad with Pickled Ginger), fried rice or noodles, and stir-fries. Straight from the pack, this versatile delicacy is also the perfect complement for tempura and other fried foods.