Umeboshi, or Japanese pickled plums, are the jewels in the crown of Japan’s pickling tradition. They have been consumed for over a thousand years, first as a medicine, thought to prevent fatigue, purify water, and purge toxins, and later as a flavorful condiment. Mitoku’s umeboshi are made following an ancient, all-natural process, refined over centuries in the villages of Wakayama prefecture.

These organically grown Japanese plums are pickled in salt, then soaked with zesty shiso leaf to impart color, flavor, and aroma, as well as the antibacterial and preservative qualities traditionally associated with the herb. The resulting umeboshi have all the eye-opening tang and tartness you might expect, but are balanced with a mellowness derived from the slow and careful production process. 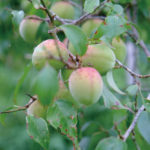 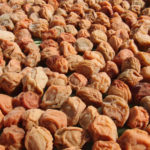 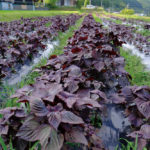 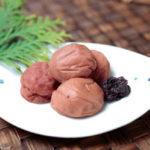 Wakayama Prefecture, referred to by some as Japan’s “fruit kingdom”, is located just south of Kyoto at the tip of the Kii peninsula on the main island of Honshū. The region’s mild climate, plentiful rain, and sheltered geographical conditions provide an ideal environment for fruit cultivation, and one of the most famous fruits grown in this fertile land is the Japanese plum or ume. Mitoku’s umeboshi are produced here, in the heart of Japan’s most famous pickled plum region.

The ume harvest takes place over just two months in June and July. This critical period will determine stock levels for the rest of the year. Here, as in the other stages of production, timing is of the essence. The plums must be gathered at just the right stage to maximize their potential. Too early, and the plum will be hard and unappetizing. Too late, and the overripe plum will be soft, mushy, and tasteless. This said, the timing of the harvest may vary depending on the producer. One of our suppliers, for instance, located in the village of Ryujin, Tanabe, picks their plums relatively early, in the first week of June when the plum is green and firm. These young plums have not yet ripened and are at their peak levels of acidity.

Because our plums are naturally cultivated, they are strongly affected by the weather and other factors, meaning that their flavor will vary from year to year. This also means that they will be irregular in shape and must be sorted after harvesting. Initial sorting is done mechanically by size, after which the plums must be inspected manually to check for signs of ripening or damage. The plums that pass this inspection will eventually become umeboshi, while the rest will be used to make other ume products. Once the plums have been sorted, they are washed and soaked in water to remove any bitterness. The soaking method varies greatly according to the particular characteristics of each plum. The producer must pay close attention to each fine detail and adapt accordingly to produce umeboshi of the highest quality.

After soaking, the plums are pickled in large tanks, which vary in size from three to five tons. Once a layer of plums has been added, a glittering layer of sea salt is sprinkled on top. Alternating layers of salt and plums are added until the tank is full. The salt plays a vital role in preventing the growth of undesirable microorganisms.

As the salt penetrates the flesh of the plum, the inner liquid, known as ume-su (plum vinegar), is drawn out. The heavy lid of the tanks puts pressure on the tightly packed mixture inside, keeping the plums submerged in their own juices. The plums are kept in their tanks until July. Once the pickling process is complete, the plums are removed and placed outside to dry in the humid midsummer heat. During this stage, the plums are rotated to ensure that they dry evenly. Extra special care must be taken here to ensure that the delicate skins do not crack.

Once the plums have dried, they are stored indoors to mature. Freshly dried umeboshi is highly acidic, but the storage process allows the plums to mellow, producing a more well-rounded flavor. During production, the flavor of the umeboshi is not static, but dynamic and constantly changing. For this reason, the skill of the manufacturer in monitoring and adapting to these changes is of the upmost importance.

Umeboshi and umeboshi paste are lively and versatile seasonings that add a pleasant tartness to salad dressings, cooked vegetables, and sauces. Umeboshi is also commonly served in Japan as a condiment with rice, or tucked inside a rice ball wrapped with nori. In the summer, thick cucumber slices spread thinly with umeboshi paste are a cooling treat. Lightly spread on cooked sweet corn, it makes for a delicious, healthy alternative to butter and salt. Umeboshi also goes well with members of the cabbage family, including broccoli, kale, and cauliflower.

When using whole pickled plums, it is usually necessary to remove the pit and mince the flesh before adding to a dish. As a more convenient option, Mitoku Umeboshi Paste can be substituted for umeboshi in virtually any recipe.

Umeboshi often come with shiso leaves, which are delicious inside nori rolls or tossed in with steamed or sautéed vegetables.

Umeboshi vinegar, or ume-su, is a tart and salty seasoning that can liven up salad dressings, homemade pickles, and tofu spreads, and also adds a deliciously pungency to cooked leafy greens (especially cabbage), cauliflower, broccoli, and green beans. To use with vegetables, simply steam, boil, or sauté the greens until tender but still vivid in color, then drain if necessary, place in a serving bowl, and toss with umeboshi vinegar to taste. When substituting umeboshi vinegar for other types of vinegar, substantially reduce the amount of salt stated in the recipe, or omit entirely.

The following recipes will help you become familiar with umeboshi and umeboshi vinegar and will soon have you discovering new ways to use these delicious and healthy seasonings.