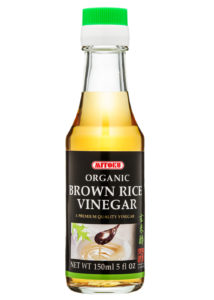 Refreshing and delicious, Mitoku’s Organic Brown Rice Vinegar is a wonderful seasoning with a stimulating contrast of flavors that can bring almost any food to life. Made entirely from brown rice sake and naturally aged for over six months, this fine vinegar has a full-bodied yet mild flavor, characterized by gentle sweetness, with none of the harshness of industrial vinegar.

The Origins of Kyushu Vinegar

The origins of Mitoku’s organic brown rice vinegar date all the way back to a 1,000-year-old method, which today survives only on a small scale on Kyushu island. Here, the locals produce specialty vinegar from brown rice sake fermented that is fermented in earthenware crocks. Originally, these crocks were buried in the ground.

Inspired by this ancient tradition, our producer uses a process known as “still standing fermentation”, which means that the vinegar mixture is left to ferment without stirring. This method is much slower than commercial quick-brewing and requires careful monitoring, but is said to produce vinegar with a more well-rounded texture and flavor. 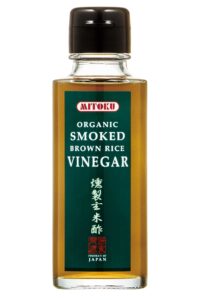 An innovative new twist on the Japanese vinegar-making tradition, this intriguing item uses the same patented process as Mitoku’s smoked soy sauces, infusing our classic brown rice vinegar with invigorating aromas from smoked Japanese cherry wood. The gentle, complex flavors of the vinegar blend perfectly with the sweet smokiness of the cherry wood, adding a whole new dimension to this traditional seasoning.

The unique flavors of this exciting new vinegar are ripe for experimentation. As with our smoked shoyu, we recommend that you start out by replacing the rice vinegar in a familiar recipe with smoked brown rice vinegar, then let your imagination take over from there. The powerful flavor and aroma mean that just a small amount will go a long way  towards enriching your cooking repertoire.

The vinegar-making process begins with a thick sake made from just three ingredients: brown rice, spring water, and koji, otherwise known as Aspergillus Oryzae, a fermentation agent so integral to the nation’s cuisine that it has been named Japan’s national fungus (kokkin). The first step is to inoculate the brown rice with koji spores. The rice is steamed, allowed to cool slightly until it is warm to the touch, then sprinkled with spores and set to incubate in a warm, humid room.

During incubation, the spores feed on nutrients from the brown rice, producing digestive enzymes that will go on to play a key role in the fermentation process. Once the germinating spores have absorbed sufficient nutrients, they extend long, white filaments that spread throughout the rice, covering its surface. These filaments contain the vital enzymes needed to kick-start fermentation.

Once ready, the brown rice koji is combined with water and additional cooked brown rice and poured into vats to ferment. The koji enzymes convert the proteins, carbohydrates, and fats of the rice into amino acids, simple sugars, and fatty acids, then yeasts convert the sugars to ethyl alcohol. The end result is a thick sake called moromi that provides the base for Mitoku Organic Brown Rice Vinegar.

The moromi is mixed with spring water and seed vinegar from a previous batch and poured into casks, where it is left to ferment for a few months and then to age and mellow for several more. Once aged, the vinegar is filtered through cotton, flash-pasteurized, and bottled.

Besides being a mainstay in salad dressings, pickling mixtures, and marinades, rice vinegar also perks up sauces, dips, spreads, and entrées. Japanese cooks add a little rice vinegar to cooked summer rice to prevent it from spoiling. To make beans more digestible, add a little vinegar to the cooking liquid once the beans are tender. Brown rice vinegar also enhances the flavor of grain, vegetable, and fish dishes. It can help balance salt and fats, and reduce cravings for sugary sweets.