Mitoku offers a wide range of high quality sea vegetables with a rich diversity of flavors, colors and textures. Our sea vegetables are sourced exclusively from small, traditional suppliers, for whom harvesting the bounty of the sea is a way of life, and who pick wild sea vegetables only when they are at their peak.

Except for sushi nori, which comes pretoasted, nori should be lightly toasted just before use by briefly passing the unfolded sheet over a gas flame or electric burner. The nori is ready when it becomes crisp and fragrant, and the color changes to a more vivid green. Be careful when toasting, nori is delicate and burns easily.

Nori is most commonly used to wrap rice balls, which are a mainstay of Japanese lunch boxes and picnic baskets, and is also used to wrap other foods such as nori-maki. In addition, nori can be crumbled or cut into strips and used to garnish soups, vegetables, and various other grain or noodle dishes. It is particularly delicious when cut into two inch strips and wrapped around mouthfuls of warm rice dabbed with umeboshi paste.

More recently, nori is also used as a party food in a variation of nori-maki called te-maki. Te-maki literally means “hand wrapped”. A quarter sheet of toasted nori is topped with a little sushi rice or noodles along with an assortment of foods such as raw tuna, avocado, or raw vegetables. Condiments such as umeboshi or wasabi may be added, then the nori package is rolled into a funnel or cone shape. Te-maki adds an exotic flair to parties, especially when served with hot sake.

Another variety of nori, called aonori or green nori, comes in flake form and is typically used as a garnish or as a seasoning in fried rice. This type of nori is the richest in iron and protein.

Hijiki is very attractive when properly cooked and presented. Its shimmering black color adds vivid contrast and beauty to any meal. When planning a meal that includes hijiki, try to use foods with colors that create an attractive contrast to its dark color. Carrots, winter squash, and pumpkin offer deep orange colors, while lightly steamed broccoli and watercress provide bright green tones. Cold hijiki salad topped with a creamy white tofu dressing and a sprinkle of finely minced green onion or parsley presents an attractive contrast of colors and is particularly appealing on a hot summer day. Although hijiki and arame are prepared in similar ways, there are a few important differences. Hijiki is thicker, somewhat coarser, and has a strong ocean flavor. Arame’s considerably milder aroma and taste make it a good choice for anyone just beginning to use sea vegetables.

Both should be rinsed quickly but carefully to remove foreign matter such as sand and shells, then covered in water and soaked. However, because of the difference in their textures, hijiki should be soaked for ten minutes, while the more delicate arame needs only five. Longer soaking draws out the important nutrients and waterlogs these vegetables, making them less able to absorb the flavors of seasonings.

If you use the soaking water in cooking, pour it in carefully so as not to accidentally add any sand or shells that may have sunk to the bottom. Reserve a small amount in the bowl and then discard it. Using the soaking water strengthens the flavor slightly and reduces the need for added salt or shoyu. The recipes that follow are written with freshly drawn water in mind, so if you choose to use soaking water, cut the amount of shoyu in half and add more only if needed.

Soaking increases the dried volume of arame and hijiki by about three times, so please take this into consideration. One cup of dried hijiki will become three cups when soaked. For general preparation, squeeze out excess water after soaking and sauté the sea vegetable in a little oil for a few minutes. Add soaking water or fresh water to almost cover and simmer until the vegetables are tender and most of the liquid has been absorbed (about 35 minutes for hijiki and 25 minutes for arame). Finally, season the tender vegetables with shoyu and mirin (if desired), and cook for a few minutes more. Both hijiki and arame are delicious when sautéed with sweet vegetables such as carrots, slow-cooked onions, winter squash, lotus root, shiitake, and dried daikon radish. Hijiki and arame are also delicious when served with deep-fried fresh tofu or when sautéed with dried tofu. A little chopped hijiki or arame can be combined with cooked rice, millet, or barley. Hijiki and arame are good additions to salads, especially when topped with a tofu dressing.

To switch hijiki recipes to arame or vice versa, simply make the necessary adjustments in soaking and cooking time as described above.

The taste and texture of different varieties of wakame vary considerably. If you have been put off by the strong ocean flavor and relatively tough texture of one brand, look for a wild variety. You may be surprised at how mild and delicious wakame can be. Dried wakame is reconstituted by soaking it in water for ten to fifteen minutes. Once soaked, remove the wakame, squeeze out the excess moisture, cut away any tough ribs, and slice the fronds. Wakame is especially good in soups and salads. It can also be added to stews and vegetable or bean dishes. As wakame is tender, it should not be cooked for more than a few minutes.

A nutritious condiment can be made by toasting dried wakame (be careful – it burns easily) over a flame in a dry frying pan or in the oven. Once toasted, the wakame can be crumbled or ground into a powder. Toasted sesame seeds may be added and ground with the toasted wakame. This condiment can be sprinkled over grains, tossed with cooked rice, or added as a seasoning to soups and salads.

Kombu can be used to create delicious clear soups and cooling pressed salads, as well as hearty stews and bean dishes. In most recipes kombu need not be soaked before use. When soaking is called for, merely soak the kombu until it softens and opens up. The nutritious soaking water can be used in the recipe, or reserved and used at a later time in soups or stews.

Kombu’s most common and important use is in the preparation of dashi, Japan’s multipurpose stock for soups, stews, and sauces. Dashi appears simple, but it is integral to Japanese cooking, since it is the first step in many traditional dishes and the flavor and quality of the stock help determine the taste of the finished dish. Kombu is also good when sliced and used in soups, stews, and vegetable and bean dishes. When cooking beans, the addition of kombu is particularly recommended because it helps soften the beans, reduces cooking time, and makes them easier to digest. The Japanese commonly use kombu to enhance the flavor of the brine or mash that is used to marinate various types of pickles. Sometimes, the kombu itself is one of the ingredients to be pickled. Kombu can also be cooked in a seasoned broth, wrapped around pieces of burdock or other vegetables, and then served as hors d’oeuvres.

A nutritious condiment can be made by roasting kombu then grinding it to a powder. First, cut the kombu into small pieces and place in an unoiled skillet over medium heat. Stir the kombu pieces constantly until they become very crisp. Transfer the roasted kombu pieces into a bowl or a suribachi (Japanese grinding bowl), and grind the kombu into a fine powder. Add this powder as a seasoning to soups, or sprinkle it over grains and vegetable dishes before serving. 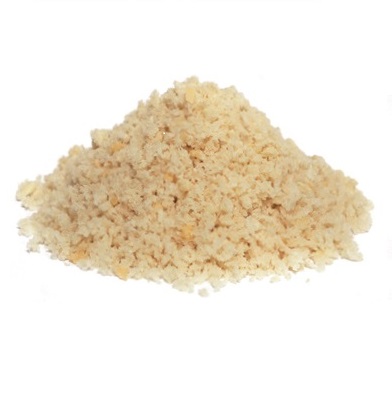 According to Peter and Montse Bradford, authors of Cooking With Sea Vegetables, the jelling ability of natural agar varies according to the acidity or alkalinity of the food with which it is used. Acidic foods may require more agar than alkaline foods do. Testing the recipe is recommended by taking a spoonful of the heated mixture and allowing it to rapidly set on a cool surface. If the mixture does not set in a few minutes, add a little more agar to the pot and simmer a few more minutes.

To use agar bars, tear them into several pieces and soak them in water for thirty to sixty minutes. Remove the agar, squeeze out any excess water, and place in a saucepan along with the liquid called for in the recipe. The liquid should be cold or at room temperature. Bring to a simmer over medium heat without stirring. Once the liquid begins to simmer, stir occasionally until the agar dissolves (about two to three minutes).

Prepackaged flakes need not be soaked. Simply sprinkle the measured amount over the liquid before heating and proceed as instructed for agar bars. In any recipe, flakes can be substituted for bars and vice versa. The jelling strength of one bar of agar is equal to two slightly rounded tablespoons of flakes.